Choosing a hairstyle and deciding which haircut you want has always been tricky. The number of available hairstyles is innumerable; you cannot count them down. Moreover, every day someone somewhere is creating some new styles.

Out of all the different kinds of hairstyles, fade has been in trend for men’s hairstyles for a long period.

What Is A Fade Haircut?

As you can already guess from the name, the length of hair gradually decreases on the side and back of the head as the hairline moves downward. Thus, the hair gradually fades to barely visible length, as the name rightly suggests.

This fading in the length of the hairs can be of different types, based on from which level the transition is starting to happen.

The three most common types of fading are low, mid, or high levels of fading. However, the type of fading you want on your head completely depends on your preference and your hair texture and face structure.

So, to clear this confusion today, we are going to discuss the differences between the different types of fading – low fade, mid fade, and high fade haircuts. 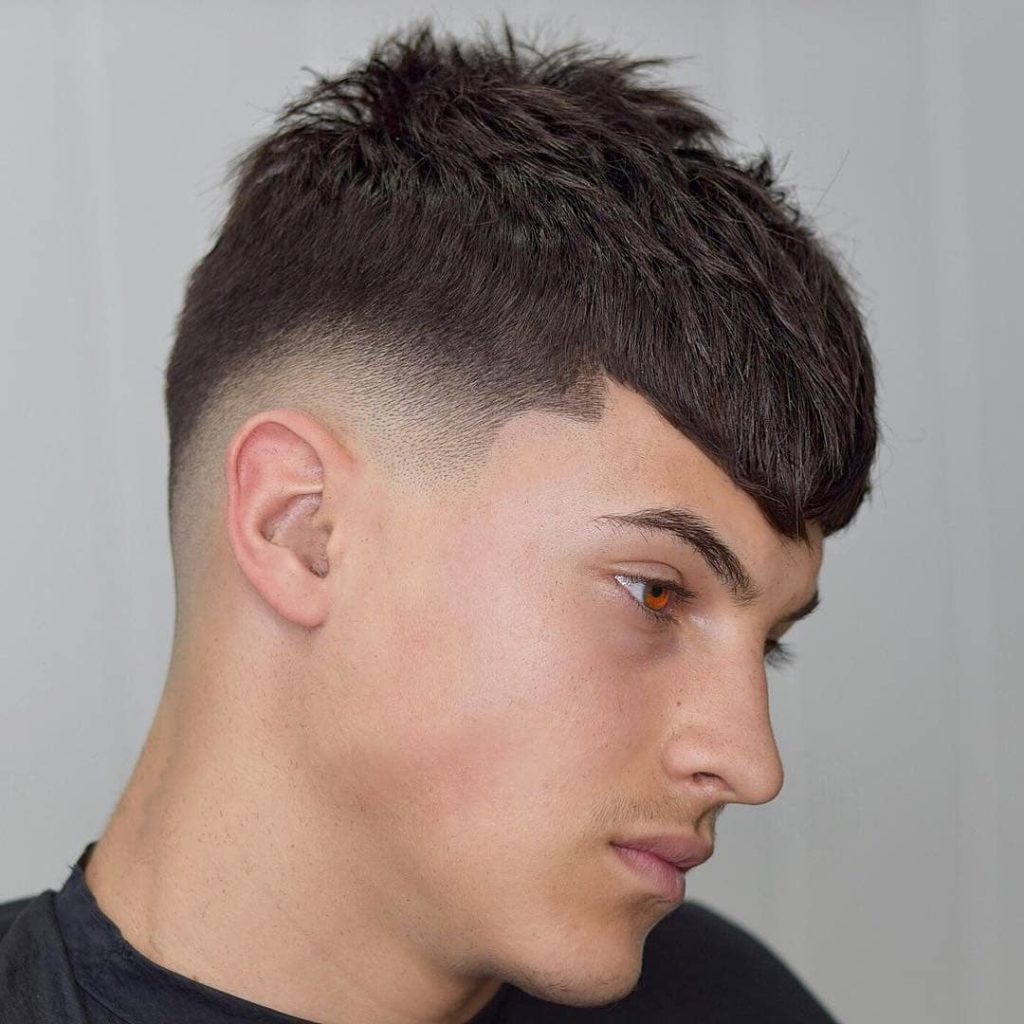 In low fade haircut, though the main principle of hairs fading away remains the same, the difference lies in the level from the transition begins.

In this case, the hair remains unchanged, almost up to three inches down from the top of the head, and the transition starts around one inch above the ear level.

The hairline usually forms an arc above the ears and gradually fades away into the sideburns.

Low fades allow you to experiment with various patterns as the volume of hair increases, and the hairstyle does not look as harsh as in the case of high fade.

You can have this haircut in various styles like skin fades, which can give a partial bald effect like the high fade or the shadow effect or the low hair drop effect at the back to make designs. 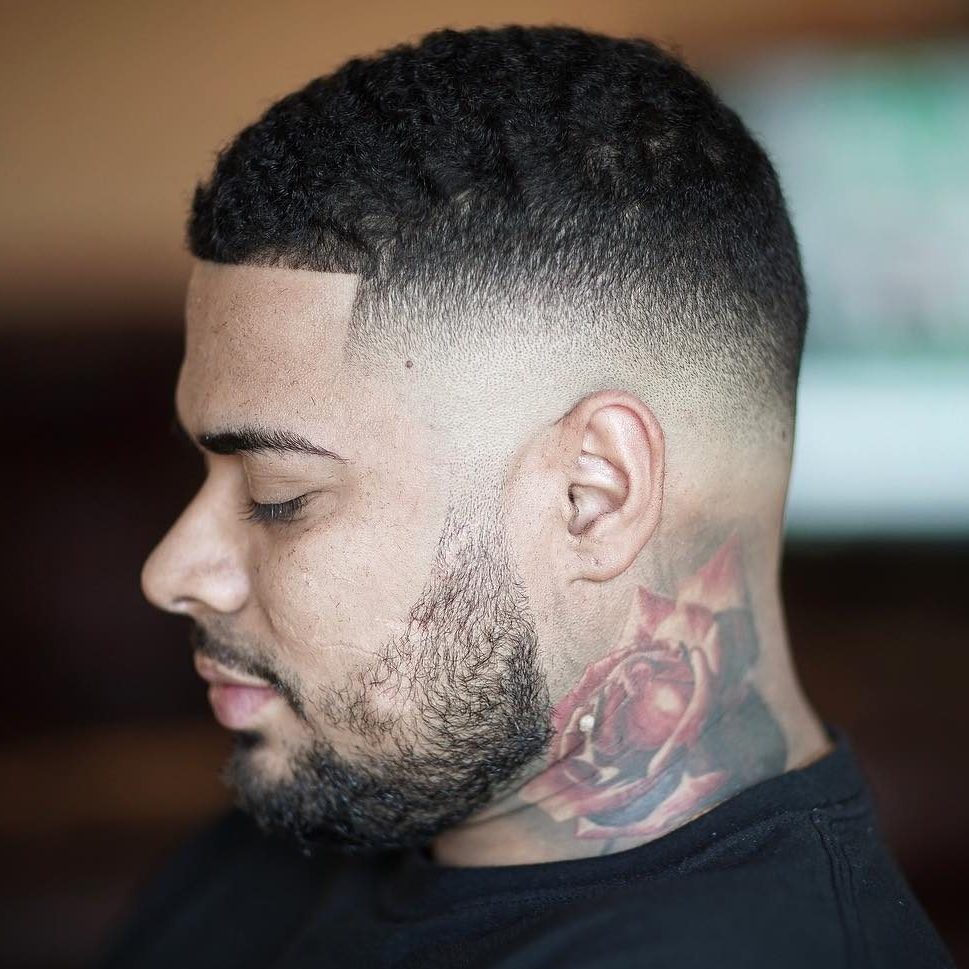 Mid fade lies somewhat between the high fade and low fade. If you feel like the high fade is too bold for you and in the low fade, there is too much hair for your liking; then mid fade is your go-to option.

Here the level of tapering of hair is not too low or too high. It lies in the middle.

The hair starts to fade in between your forehead and the ears and thus maintains a balance between the low and high fading hairlines. 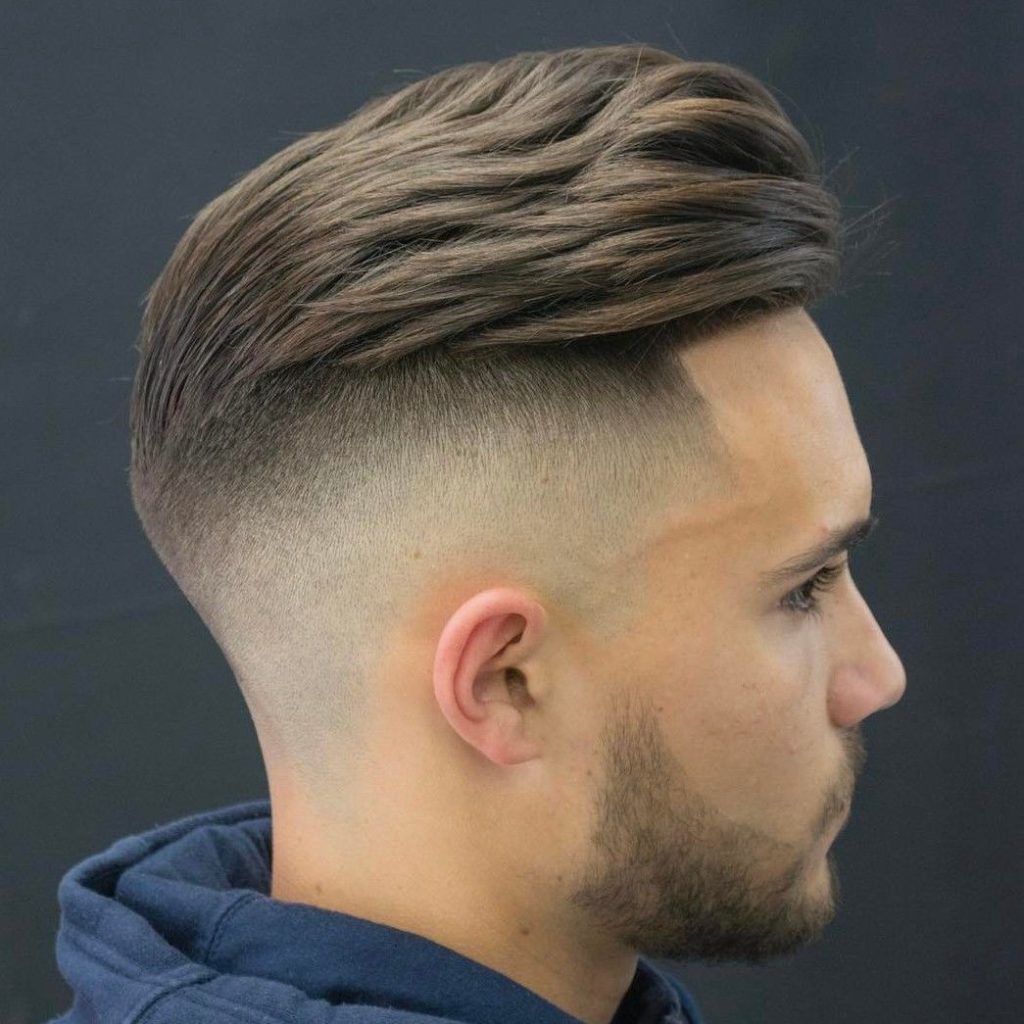 Let’s start at the top. High fade starts from the very top portion. Your thick hair lies only at the top of your head, and then from around the forehead area, the fading starts. Generally, the hairline moves in a straight line towards the back of the head.

It is the hardest. The hair covers only about 1.5 to 2 inches of your head from the top, and then it vanishes almost to the level of being invisible to naked eyes. So, if you are confident enough to show that much of your scalp area, then you can go for it.

However, the fade does not restrict you from having some stylish haircuts. Some people like to have a bald effect, while some take it to the next level and create designs at the back of the head. In this case, generally, the hair drops at the back after creating a high fade style at the sides.

Without knowing the proper terminology, it can be challenging to tell the difference between a low, mid, and high fade—but thankfully, the differences are fairly intuitive to understand.

Since the line of a low or mid fade intersects with the ear, many low and mid fades curve around the ear. Beyond these technical differences, however, there are different attributes that the different fades accentuate. 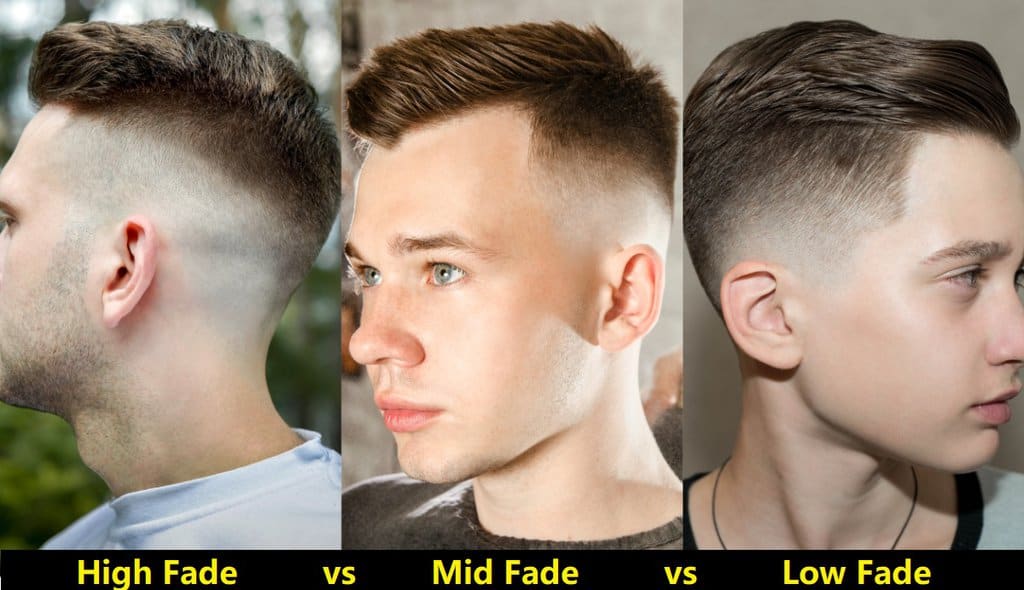 A low fade is on the subtler side; it draws attention to the hair at the top of the head, but not excessively so. A high fade is a much louder cut, assertively drawing the eye up the sides of the head and to the crown of the hair. Naturally, a mid fade falls somewhere in-between—not too subtle, not too loud.

Of course, these differences are also relative to the tapering and shave of a fade. While low, mid, and high fades each denote different heights at which the taper begins, the intensity and length of the taper can be variable.

A drop fade, for example, has a line that comes down lower in the back than on the sides of the head, giving an undulating fade shape that accentuates a high fade.

A skin fade has a similar effect. In this fade variety, the shortest section of the fade is shaved down to skin level. This can intensify the contrast between the top and bottom of the head, especially in high fades and drop fades.

The point, more broadly, is that the character of a high, mid, or low fade can depend immensely on the length of the hair.

A fade’s character changes dramatically if a design is printed, as in a burst fade. These designs can serve different effects depending on the height of the fade—a pattern can spruce up a low fade, for instance—but regardless, the shape of the cut can accentuate or mitigate the effect of a fade.

How Do You Choose the Best Fade for You? 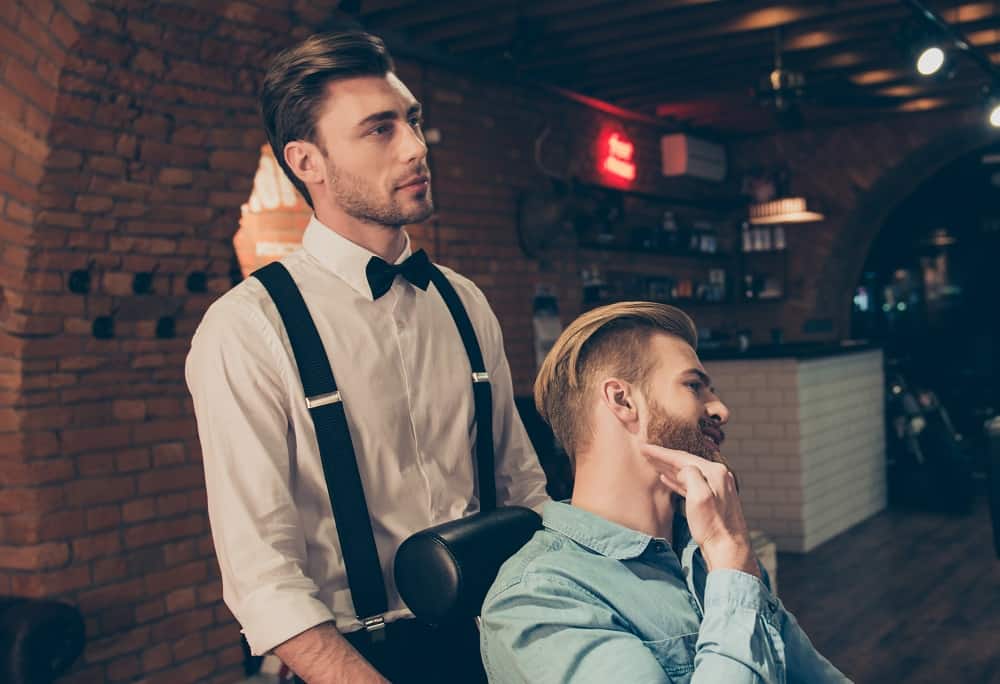 Fades can be an excellent complement to all kinds of faces—few heads look bad with a fade on them! Once you decide that you want a fade, however, there are some key factors to consider when choosing your fade height.

At the outset, it’s essential to consider that everything related to your fade is subjective and personal. There is no hard rule for which fades look good and which look bad—it all depends on what kind of effect you want to convey through your fade.

Short hair can also influence the appearance of your fade. If you have short hair, a high fade can emphasize the lowness of your hair (and potentially give the impression that your head is flat). A low fade, on the other hand, can have the effect of lengthening your hair’s appearance.

Hair type – It is also relevant when deciding the best fade for you. Some types of hair strike an interesting contrast with a fade; a mid fade can strike a nice contrast with the ruggedness of curly hair (without making it stand out too starkly from the head). Straight hair tends to work well with a high fade, with the fade adding texture to the hair.

Finally, keep in mind the maintenance required with different fades. This is especially true of high fades. Because they expose a good deal of your skin, you need to be very thorough in applying sunscreen in the heat and insulating your ears well in the cold.

Each of these haircuts provides some versatility to those with short hair.

Apart from the difference in the level of tapering of hair, there is not much difference in their styles. While maintaining the fading part, professionals can bring out different styles from these haircuts. 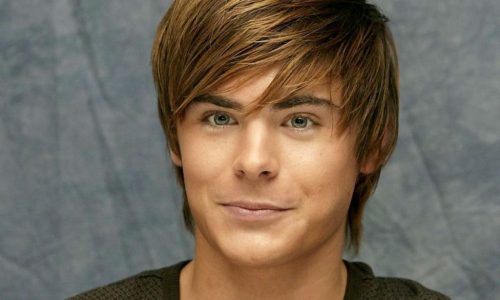 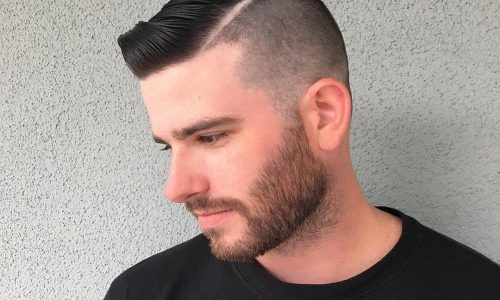 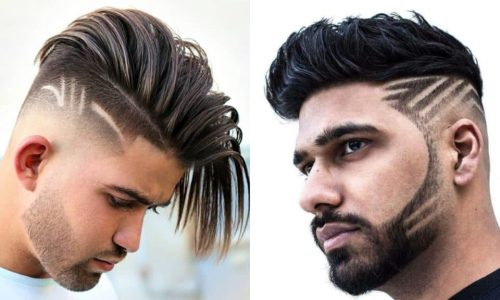 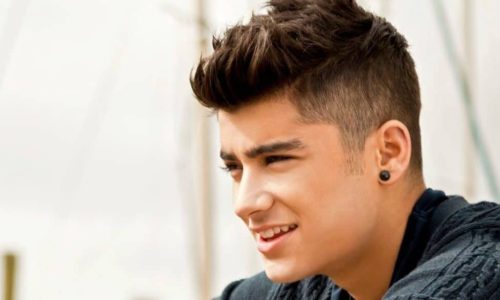 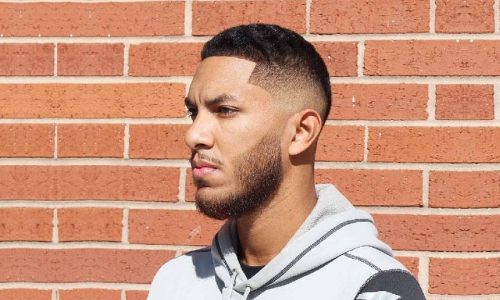 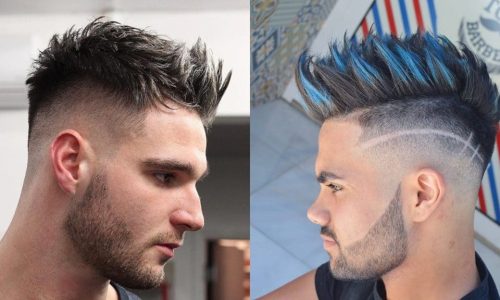