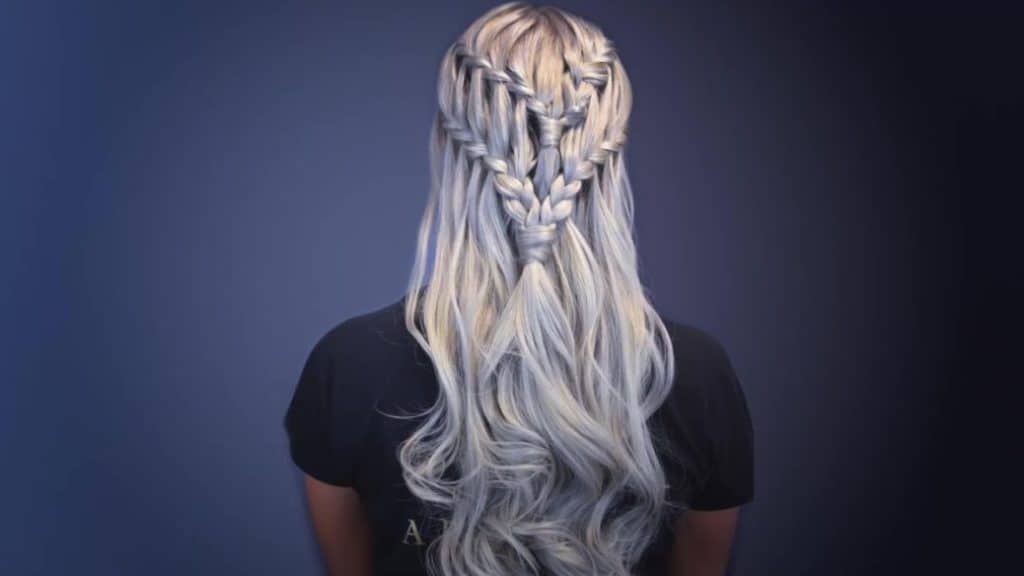 At times, choosing a hairstyle might be difficult. The hairstyles depend on the length of the hair, face cut and texture of the hair. Hairstyles must be chosen so that it brings out the best features. For example, if someone has thin hair, the hairstyle can be chosen to make the hair texture look thicker.

This waterfall braid style can be best carried off with women having thick long and blonde hair. The hair is straight and long. The waterfall braid has been elegantly done on the side of the head. The hair strands are slightly curled towards the ends. The braid has been neatly so that it looks prominent. A neat makeup of highlighted eyes would suit this hairstyle well. This is a unique hairstyle which can be worn with any elegant or casual dress. 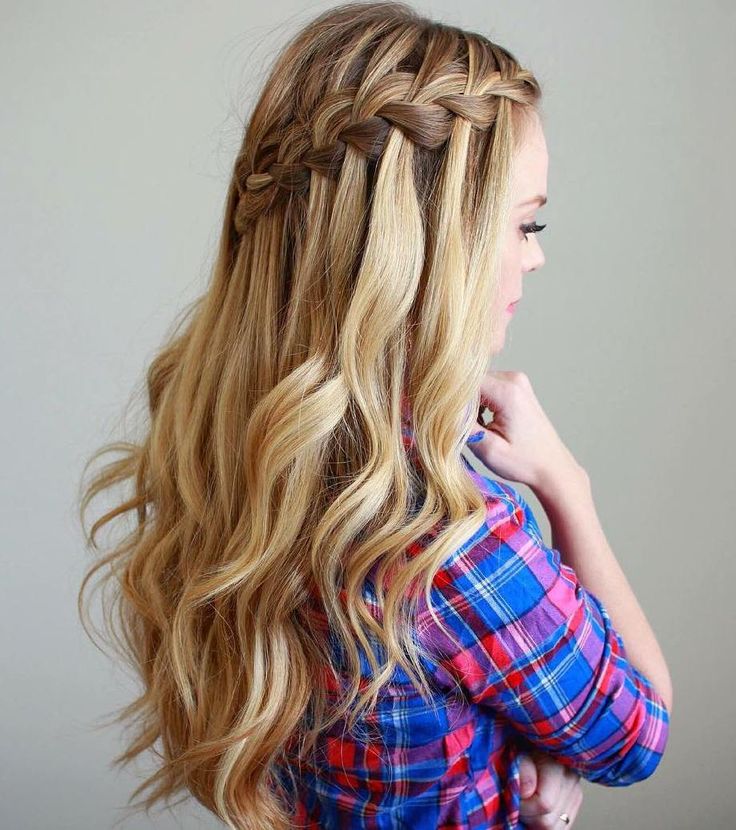 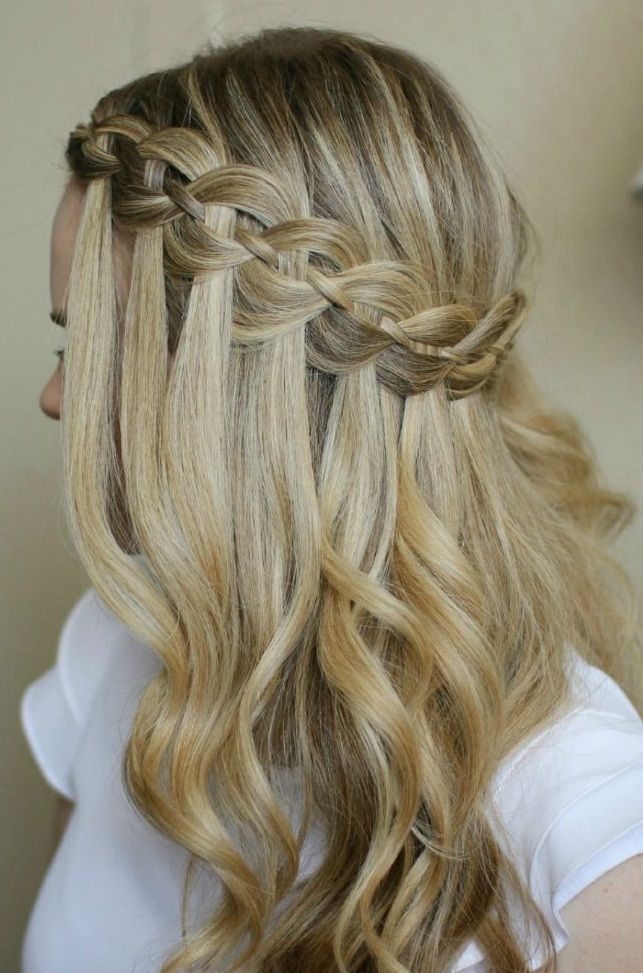 The hair has been done up extremely carefully and neatly to make this hairstyle. The texture of the hair is thick and fine. Small sections of hair from both sides have been used to make the waterfall braid. Ending just below the braid, the hair strands have been beautifully curled. The curling has been done so that the hair strands look like they are falling below the braid. The entire hairstyle is kept neat and careful so that a single strand of hair is not out of place. 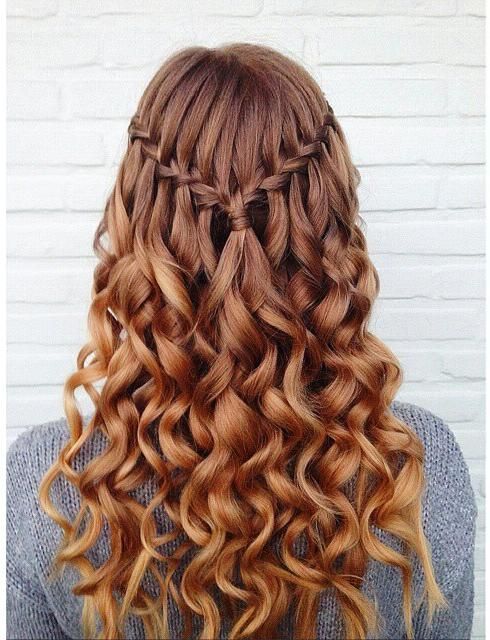 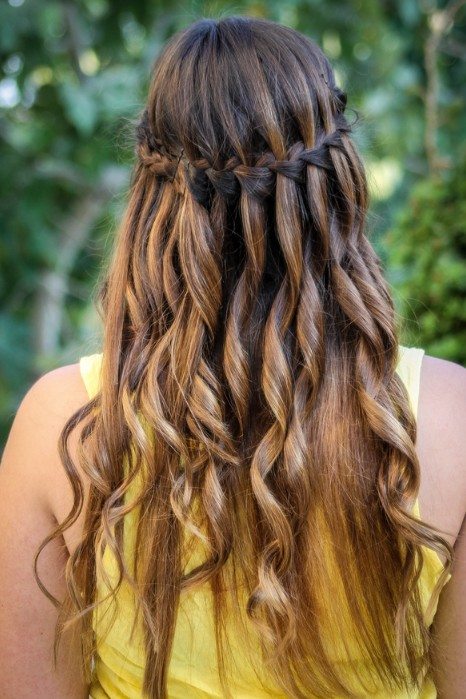 The two section angular back waterfall braid hairstyle is one unique variation of the regular waterfall braid. The braid has been done taking two sections of the hair. The hair length is long and it has volume in it. The hair texture is kept a bit messy and casual. The casual messy braid has been done from the top of the head. It has been extended till the below of the head at the back. 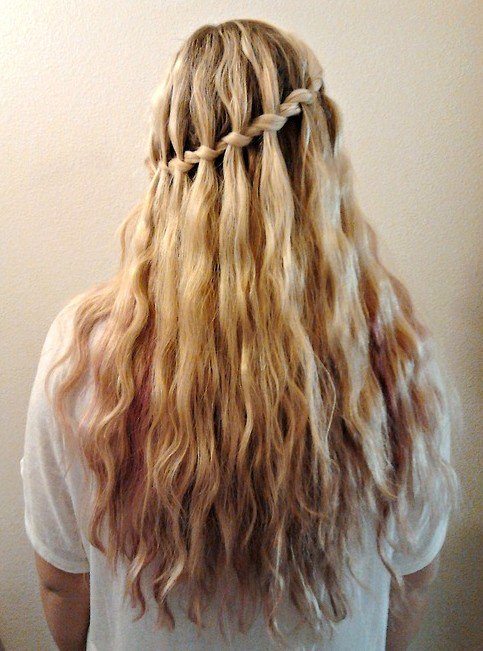 Like the name, the hair is highlighted in caramel color. This hairstyle will suit women who have thick and voluminous hair. The length of the hair is also long. The topmost portion of the head is kept smooth and straight. A neat and thick waterfall braid has been done at the back of the head. The extending hair strands have been elegantly curled at the ends. 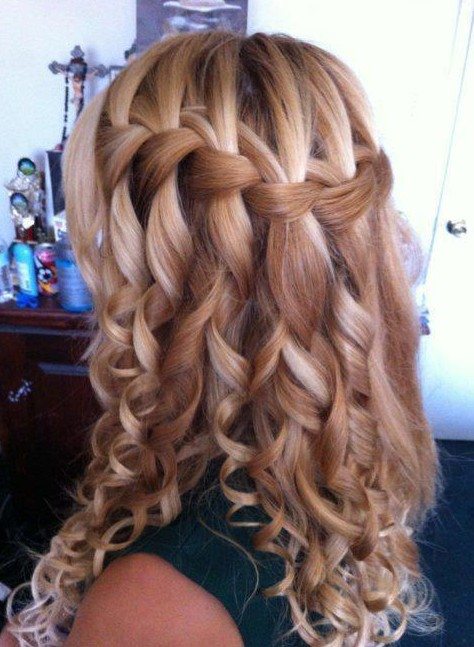 The heart shape is an extremely stylish and cute hairstyle. Taking small sections of hair from all the sides, a heart-shaped braid has been made at the back of the head. The hair is kept neat and sleek. The hair ends have been slightly made wavy at the ends. This look can be carried off with a cute dress for a romantic date or any special occasion. 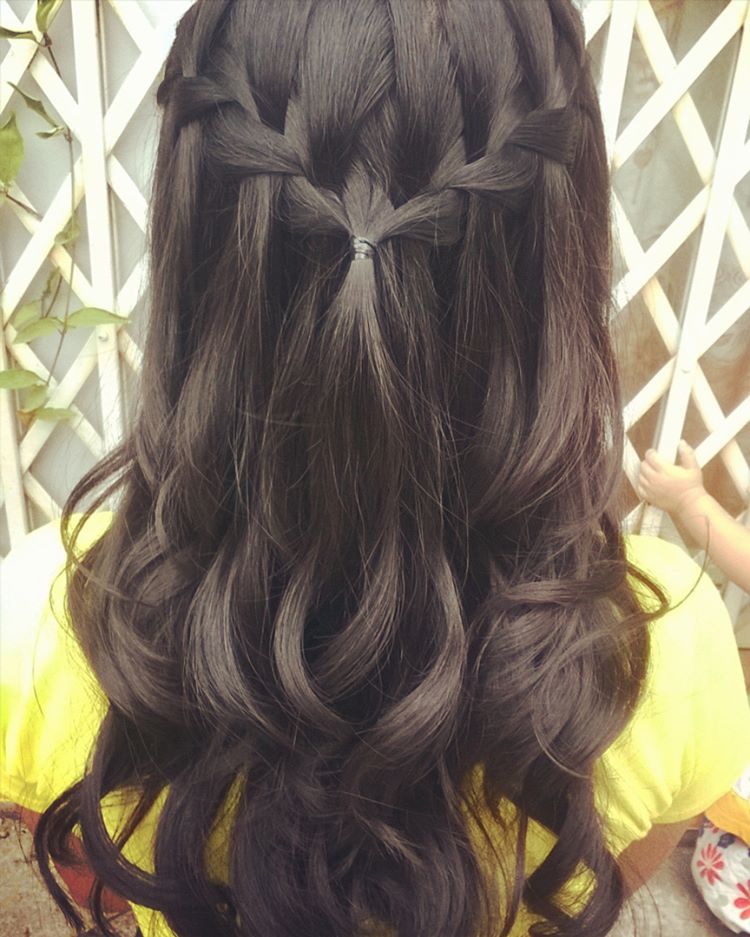 Half Up Half Down Double Waterfall Braids 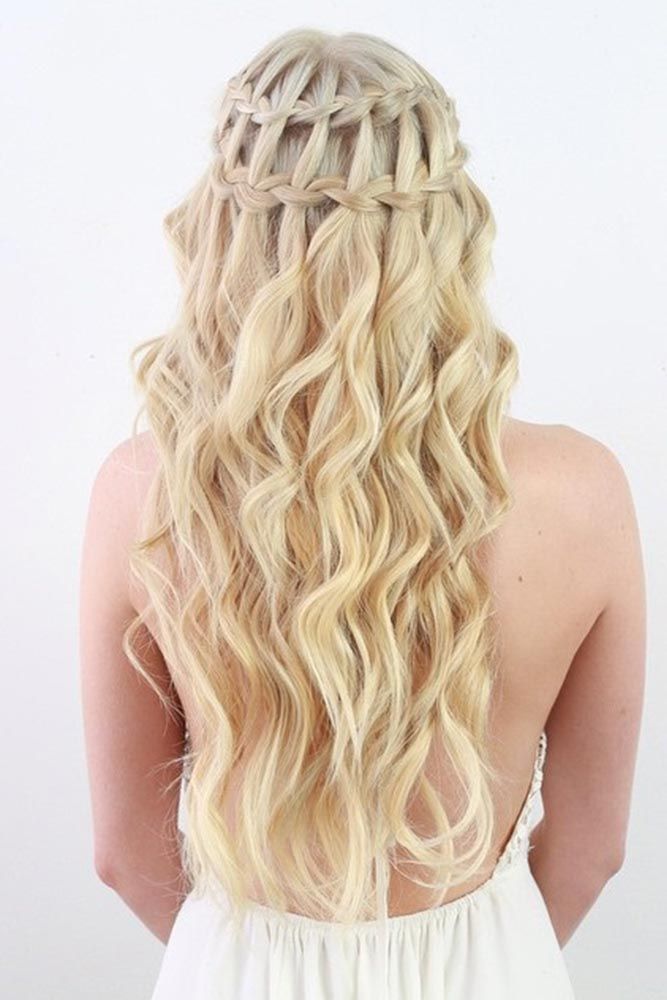 Side Waterfall Braid for Short Hair 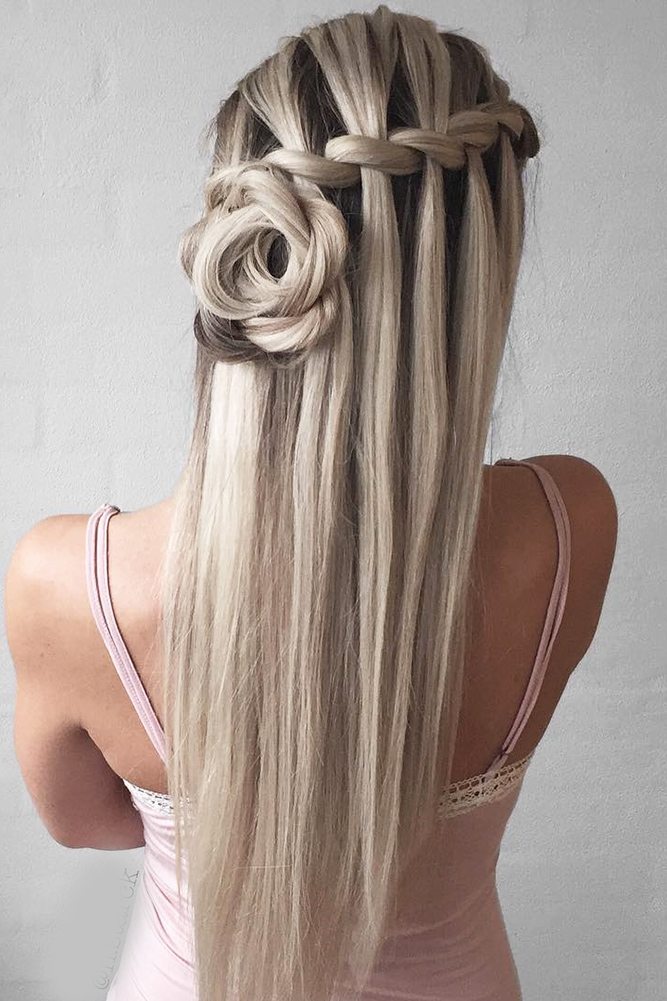 The waterfall braid hairstyle looks gorgeous on silver blonde hair with highlights. The hair strand, especially at the ends, is made wavy. The length of the hair is long and extends down the shoulders. The waterfall braid is done very carefully and neatly taking thin strands covering the top portion of the head. The falling strands have been left open and made into slight waves. 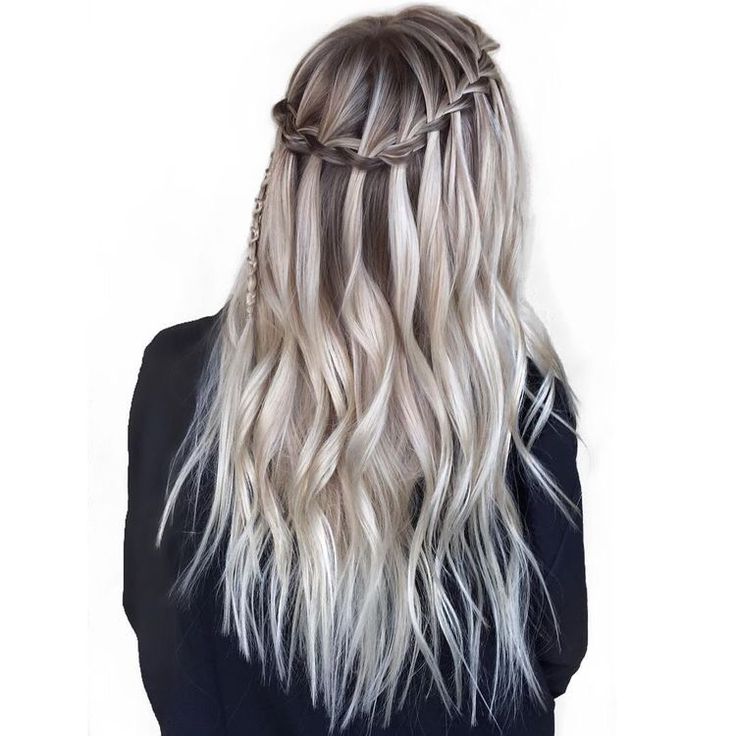 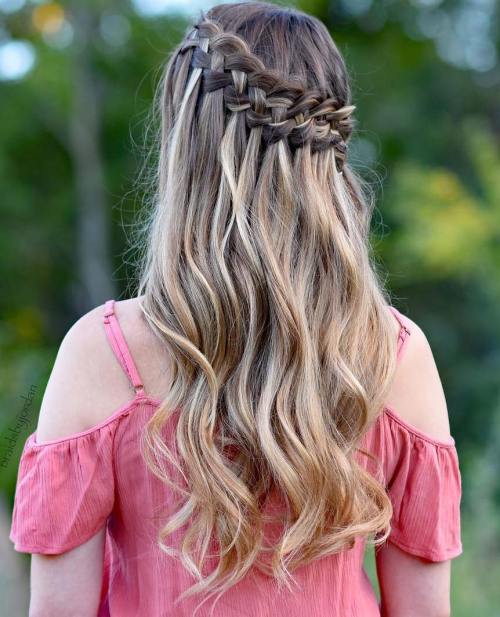 For making the mermaid hair with double waterfall braids, very long length of hair is needed. The style looks better on a long length of hair. Double waterfall braids have been done in the hair taking very thin and fine strands of hair. The braids have been done neatly. The entire hair is kept slightly messy and wavy. Rest of the hair is kept free flowing and loose. This elegant hairstyle can be paired with minimum jewelry and any casual or semi-formal dress. 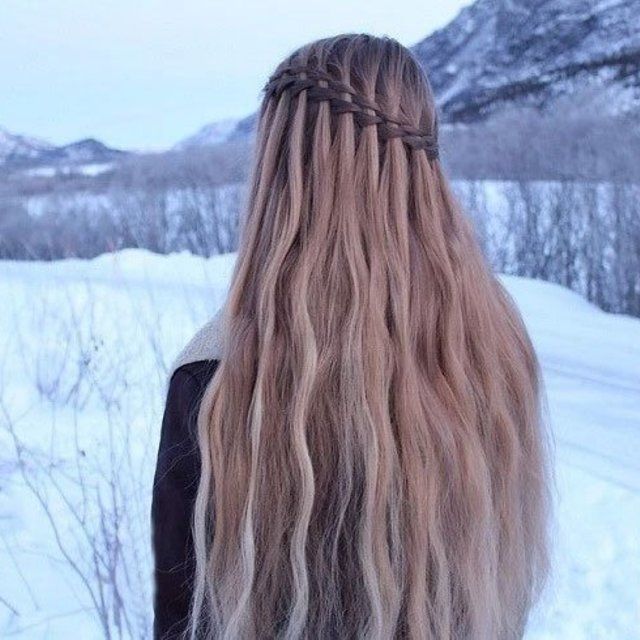 For making this hairstyle, long length of hair which is sleek is desirable. The long hair is neat and sleek. The voluminous hair makes the braid more prominent. Taking thin sections of hair from one side, a neat waterfall braid has been made. This neat look will look best with a formal wear or a casual wear. A neat makeup would definitely complement the look. The braid is kept a bit thicker to make the style more elegant. 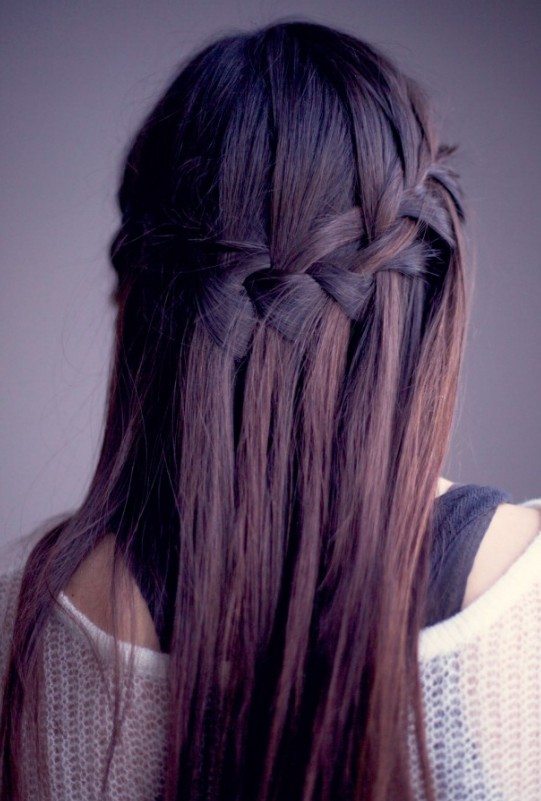 When it comes to prom, a perfect hairstyle is what everybody needs. The waterfall braid can be done nicely and elegantly to create the perfect prom look. The thick and long hair is made wavy and slightly curled at the ends. The thick braid is made taking thick sections of hair. Rest of the hair is left open and curled at the ends. The thicker texture of the hair makes the entire hairstyle elegant and gorgeous. 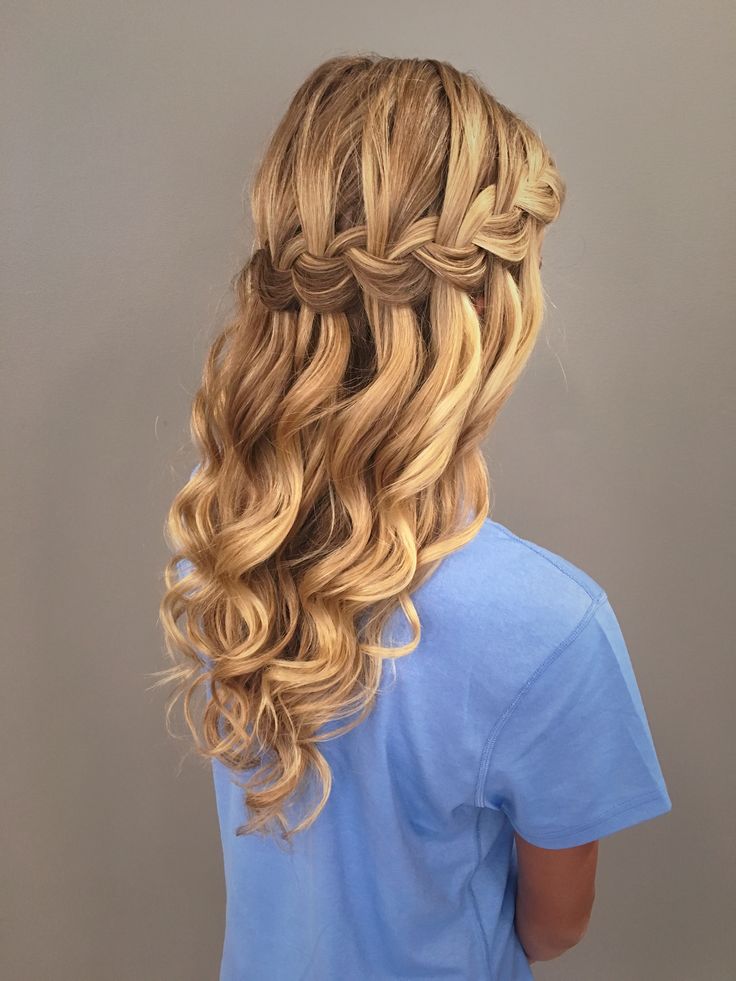 The creative waterfall braid hairstyle is done up elegantly to create a fresher version of the traditional waterfall hairstyle. The waterfall braids are done in double layers. The open ends of the first braid have been merged with the second braid. The length of the hair is long. The texture of the hair is fine. The hair ends have been made slightly wavy. This look can be easily carried off with any casual or semi-formal dress.

16 Waterfall Braid Hairstyles For Your Beautiful Locks was last modified: May 18th, 2018 by Admin

21 Dashing and Dapper Braids for Boys

25 Long Braided Hairstyles to Look Beautiful as Never Before

22 Most Coolest and Fabulous Feed in Braids

It’s very important for all of us to keep our appearance look stylish and well groomed especially with outfits and haircuts. So here we are to provide you brief ideas about one of the major aspects of our look, and that is a haircut. Haircuts are something that will give us perfect look and it enhances our face to look more beautiful, so all the people out there grab more stylish and hottest haircut inspirations from our site.
© Copyright 2018 - HottestHaircuts.com